I originally wrote this when my first son, LB was 21 months old and we visited my family in the States. And this summer, I visited my family again with AH who was 23 months old at the time. The post still holds true, so I wanted to post it here. In LB’s six years, he has visited about 12 countries, some multiple times. When AH was just six months old, we all took an overnight ferry to France. When each son was about that age, I took him on a transatlantic flight. And I’ve flown solo on transatlantic several transatlantic flights with each boy. So, you know I’ve tried and tested my approach and it still works. So, I’ve not changed a thing from the original post, which I wrote for another site which has since done away with their blog so the content has reverted back to me. Yay! I just returned from a trip to visit my family overseas. The journey included two trans-atlantic flights and two three-and-a-half-hour bus trips with my 21-month-old son. Needless to say, preparation and caffeine were in my tool belt.

In the weeks before the trip, LB and I visited discount stores and chose little toys, treats and colouring/craft supplies that he liked. Then I tucked them into a plastic file portfolio. You know, the kind your accountant wishes you’d use. It organised the items for easy viewing, access, and storage but also gave things a greater chance of staying with us on the journey. 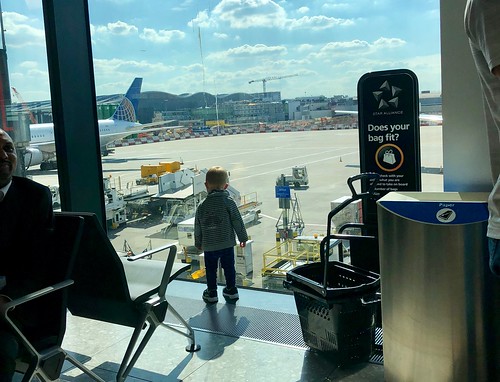 I relied on three main areas to store and organise my supplies:
• The Folio,
• The Backpack, and
• The Rolling Carry-on.
On the bus and plane trips themselves, I tucked the folio into my backpack, which was the quick-access resource. I used my rolling carry-on as a pantry of sorts with back-up supplies that would only be needed when the backpack resources were depleted. I replenished the backpack supplies between the bus and plane trips while LB was strapped into his buggy after a much-needed diaper change (him, not me). Overall tip for all these containers, don’t pack anything that rolls. That goes for round crayons, balls, toy cars, etc… They disappear quickly, so I make my own flat crayons. But I’ll go into more detail on what I brought and where it went… 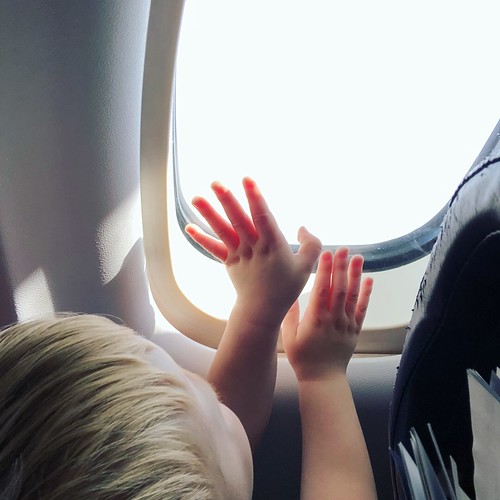 Though books can be heavy, I chose two lighter weight ones to bring along for soothing reads. Usually, I opt for a couple from the Mr. Men series. One colouring book and five non-round crayons, plus I found a cute mini colouring book with a handle at a discount store so we added that for a spare. Then there were pipe cleaners. I had no idea what use they’d be, but the imagination of a child is more powerful than an adult’s so I knew he’d come up with something. And he did. The backpack held one toy (I switched between a plastic truck and a noise-making thing, no noisemaker on the red-eye flight), his iPhone, two books (in addition to the ones in the folio), the folio of awesomeness, an empty silicone no-spill sippy cup, single-serving formula bottles, two (at least) clean empty bottles, Wet Ones or other skin-friendly clean-up wipes for sticky situations, baby wipes for diaper changes, fresh diapers, an empty plastic bag for used diapers if a suitable trash can wasn’t available, anti-bacterial hand liquid (I don’t use it a lot), snacks for both of us, a package of travel tissues, a soft toy and/or blankie for comfort, and a small change purse with bribe money for people to help carry luggage or to buy snacks/food in the airport. I also included disposable tire-changing gloves  for when messy diaper changes had to happen in less-than-ideal locations. And I ALWAYS travel with a change of clothes for each of us, plus our travel documents. The documents are always in the backpack, but sometimes I put the spare clothes in the rolling carry-on. Then my rolling carry-on held the bounty of supplies that would calm any mother’s nerves. From spare diapers and tire-changing loves (trust me, they’re fabulous for traveling when not all bathrooms have soap or running water in the sinks) to toothbrushes and supplies in case of an unexpected overnight layover. Again, sometimes the spare clothes are in here. Just depends on how the kid is acting. Of course, there will still be meltdowns because airports are overwhelming and it is a long day for a kid, but pacing yourself goes a long way. 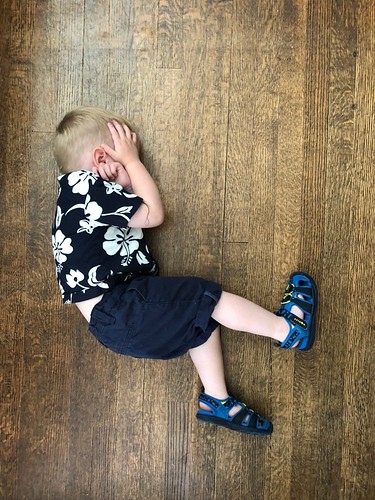 What are your toddler travel tips? 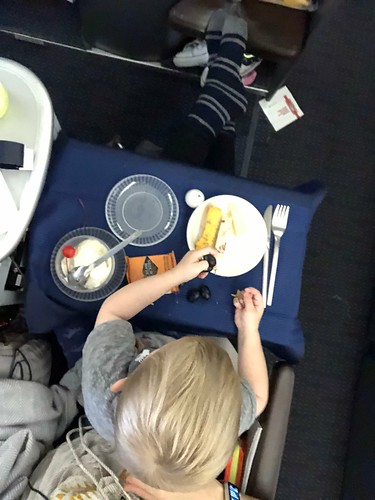 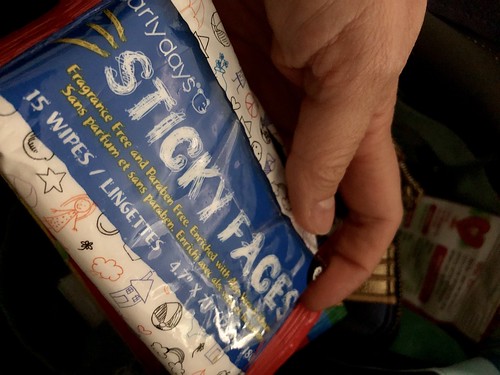