My knitting group created its own little Knit-A-Long (aka KAL) three winters ago and a handful of us opted to make the New England Knits Whale Watch Hat designed by Kate Gagnon Osborn. I did not have an easy time of it and once I realized it was coming out too small, I adapted the pattern to reduce the harsh peaks of the icebergs into soft waves and only one row of whales to make it more suitable for a baby. 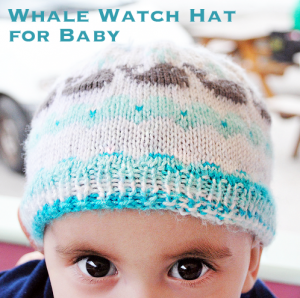 Now, on to my project notes… Choosing the Pattern: The pattern was chosen by the group of friends and I jumped in at the last-minute. The book, New England Knits, has so many lovely patterns that appeal to my East Coast American preppiness so I was thrilled with the choice and the opportunity to learn Fair Isle colorwork. Choosing the Yarn: Three of the girls in the KAL used KnitPicks yarn for their hats and two of us got yarn from Knit in Midleton and Cork Wools in Cork City Centre (by the English Market). Originally, I bought cotton 4-ply at Knit for the project, but it did not suit the project at all. I had already spent a bit of money on the cotton so I opted to use DK yarn I already had for the hat. The combination of yarns is soft, sweetly cheerful, and washable (dries quickly and takes to blocking). The bright varigated turquoise yarn for the ribbing was given to me for my birthday so it was a special one to use. Post-project refection: I highly recommend this project for anyone seeking to learn Fair Isle techniques. The book is New England Knits.