Do you ever watch TV and think, that actress has got to be related to that one from that movie. IMDB has an app for that. So, over time, I’ve noticed I think that way about a lot of actors and actresses so here is a random list of all the look alike celebrities whom I think should be cast as relatives in TV or film sometime in the future. 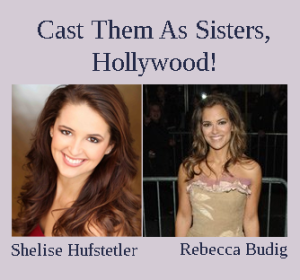 Josh Holloway and Warren Christie (I swear, they are different people!)

Katie Holmes and Margaret Colin (ok, so they have portrayed on-screen mother and daughter already but had to mention it anyway)

Jennifer Connolly and a girl from a movie I watched and now can’t remember (driving me crazy!)

Who do you think must share an ancestor to look so much alike?

I’ll admit here that I had a twin in college. She and I were often mistaken for one another even though her eyes are blue and mine are green. Her classmates would approach me to ask for notes from class and I’d say I didn’t know what they were talking about. They thought I was just being mean and keeping the notes to myself. There was one nun on campus who couldn’t tell us apart. I explained each time I was Evin not Angela, but she insisted we both had faces of the angels. Things only a nun would say!