Lately, I’ve been accepting the fact that having a knitting project not work out is a lot more frustrating than having a small sewing project go south. Maybe it is the time commitment or maybe it is that I accept my knitting skills are stronger than my sewing skills (or that blame can sometimes be shared with the machine). Whatever the reason, I am embracing sewing baby gifts, not just giving knitted baby blankets as I had previously been making.

One quick creation I have become hooked on it appliqué baby bibs and onesies. I previously posted about a set I made and now I am writing about how I turned a couple inexpensive plain bibs into custom-made creations with spare tee-shirt material, a sewing machine, and a little embroidery know-how.

The first fish was made from a brown tee that I wore twice then had a huge spill that stained it irreversibly on the front. But the back was pristine and nearly new, so I cut it up to create this fish. I used pinking shears for his edges to lend a rustic appearance and further avoid fraying, though jersey tends to resist fraying in general. After machine-sewing him onto the bib, I hand-embroidered a little smile and added an eye. 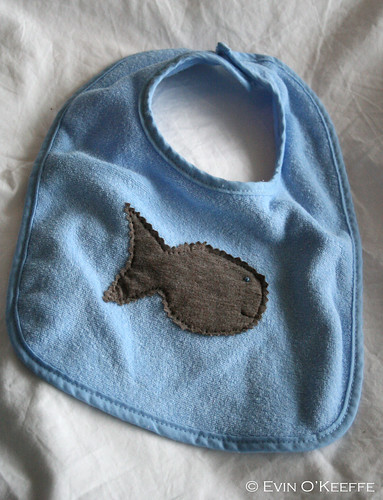 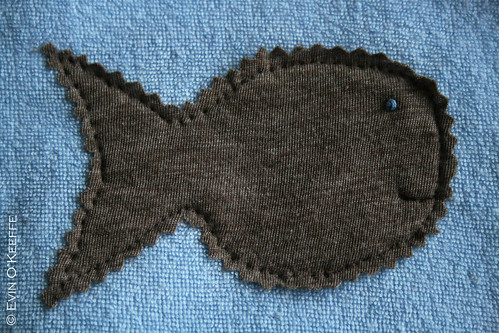 The second bib was more involved because I decided to add fins. Not sure I succeeded at it, but it was fun to try. This one was blowing a bubble, not smiling. The little stitches in lines to create fins were tedious and time consuming, but oddly relaxing. I used yellow jersey this time to make it more gender neutral. Though, honestly, I put my kids in every color under the rainbow, but I know that isn’t every parent’s style. 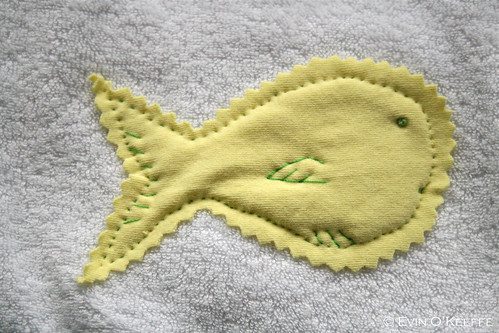 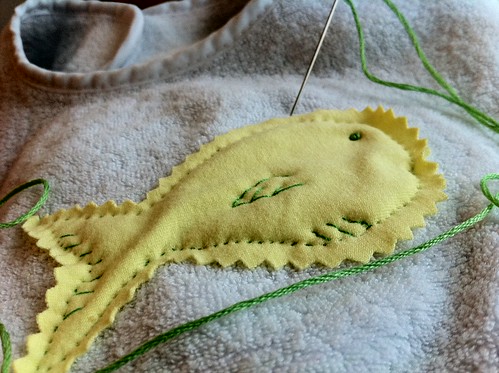 Not only does it take a fraction of the time, but appliqué baby bibs are less expensive to make and practical. After all, how many baby blankets does an infant need, versus how many bibs or onesies? Yep, babies go through more bibs and outfits than blankets in an average day. So, let the adorable sewing projects commence!

What kind of appliqué baby bibs would you make? A fish like mine or a different animal?