Picture it, Brussels 2012. We took our then 10-month-old Optimus for a trip. I packed just the chest carrier and left the big jogging stroller (or buggy as it’s called in Ireland/UK) at home. As a tiny baby, it was easy to bring him places in the chest carrier without my back hating me. But, he was getting bigger and the chest carrier wasn’t front-facing so he missed a bit of scenery. So, there we were in Brussels wanting him to enjoy this trip as much as we were so we sought out a shop to buy a simple stroller. We came out of there with a lightweight, compact, foldable Maclaren Stroller (very much like this one). Then we went to a bakery and filled up the bottom basket with a bag of pastries! 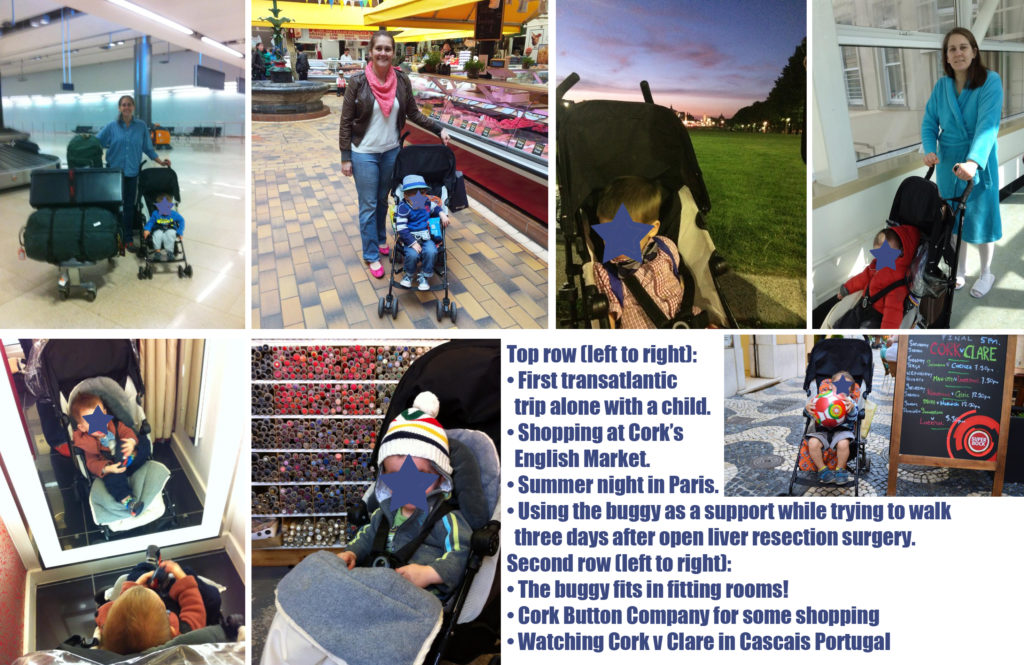 Fast forward five years and Optimus has become a big brother so it’s time (age one) for Bumblebee to start using this stroller. But it had been to 12 countries and it needed a good clean. So, I cleaned it.

I don’t really have a before or after photo because it’s not like it looked THAT dirty, it just didn’t look clean. The water tells a different story! But the process worked and was not expensive. It is actually the same approach I used when I cleaned our pack-n-play (aka, travel cot) the year before and the crocheted items made by a smoker and needed to neutralise the odor. That post is HERE if you need it.

I put two non-bio laundry pods in hot water with a 1/4-cup baking soda (aka bicarbonate of soda) then after the tub was full enough that the buggy was submerged, I added a 1/4-cup of white distilled vinegar evenly. I left it sit for an hour then went back with a sponge (use a bristled dish brush for hard surfaces or stubborn stains) to do some hands-on cleaning (with gloves) for 5–10 minutes. Then it soaked for another two hours before I did one more round of gentle scrubbing for a minute as the tub drained. That’s when this photo was taken. Then I turned on the shower and hosed the buggy down while folded (as shown below) then while upright. So, it used my bathtub space for a few hours, but it was only like 20 minutes combined of actual effort by me. Then I left it assembled upright in the tub to drip a bit before moving it outside to dry.

That worked wonderfully and the buggy had a fresh appearance and scent. 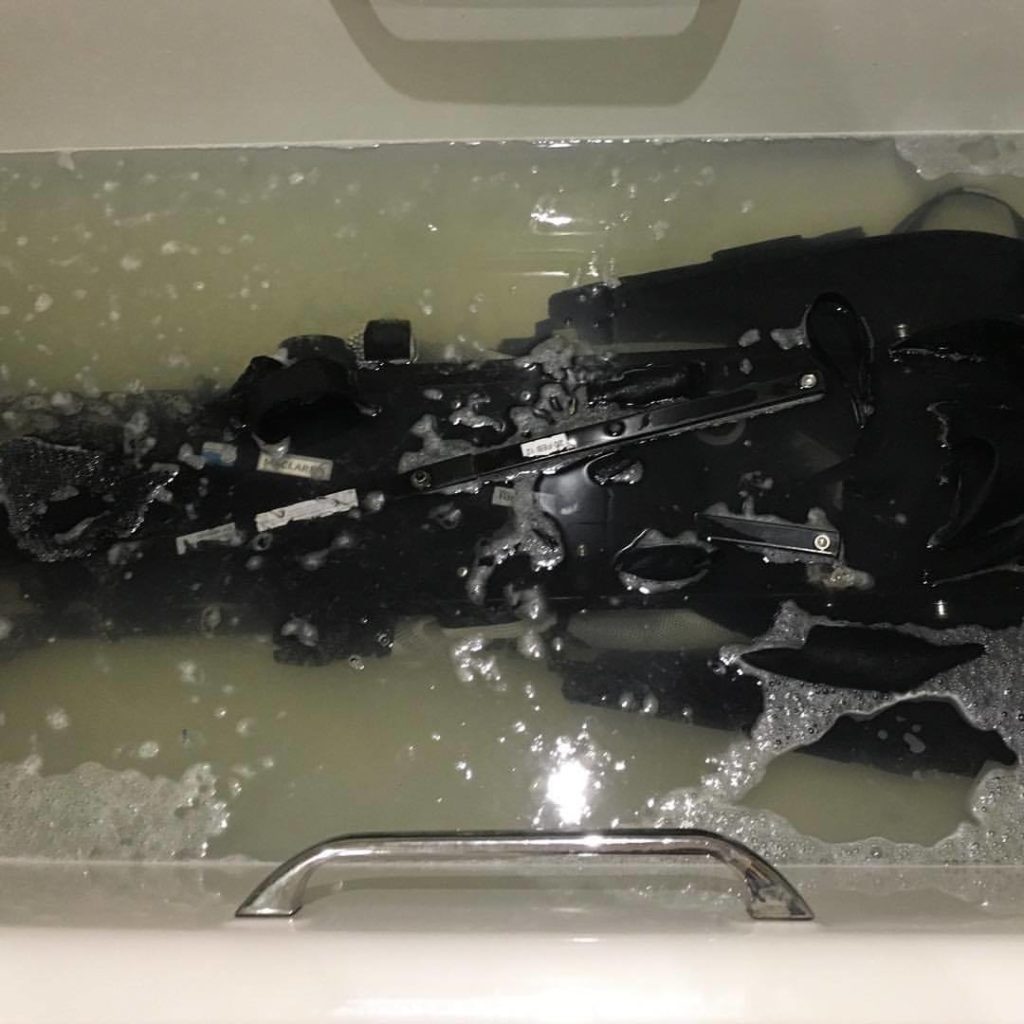 We used it for another two years after that until it lost a wheel. But the buggy had a nice run and served us off and on for seven years. Sadly, the wheel loss happened at the start of the summer when we were traveling with the kids, so I needed another option for long walks when my two-year-old needed to sit or nap. Thankfully, there was a spare stroller in my parents’ garage. It was actually the one we used two years earlier when Bumble Bee was a baby. It was the Hauck Shopper Trio Set (but ours was red/grey). And, yes, it was filthy so I repeated this process, but differently. Here’s how it was done.

The other stroller didn’t fold into an elongated shape so it wouldn’t fit in the tub or shower, so I took it to the garden and used the hose. First, I vacuumed the stroller to remove and dried dirt or residue, then I could see it had a fair amount of thick dust in spots and mildew! So, I used an Oxy laundry spray and covered the stroller in that stuff. Then used a small dish scrubbing brush (with gloves) to work the spray into the fabric of the stroller. Then I let it sit for an hour. This was summer, so I let it sit from dinner until breakfast the next day. This meant it wasn’t getting a lot of sun. I didn’t want the spray to dry on there before it worked its magic. Then in the morning, I went out and dampened the stroller with the garden hose and did more scrubbing. Then I hosed it down with the intense setting on the hose nozzle. Take that dirty, grime, and mildew! It looked much better and we were able to use it for the rest of the visit. We left it at my parents’ house because we didn’t have a clear answer from the airline if we’d be charged for bringing a stroller back (they said they charged for car seats).

I have to say, the bathtub approach resulted in a fresher smelling stroller, but both made it clean and useable.

Also, I will note that for the black stroller, we used a winter muff insert for cold months and a liner for warm months, so it was not as dirty as it could have been because I’d remove those liners regularly for washing. And yet, the stroller was so dirty.

Have you tried this? What do you think?

If you want to thank me for saving you having to buy a new stroller or pack-n-play, feel free to buy a copy of one of my books or send me a gift. This is especially useful if you are one of the readers I’ve helped by creating a custom [free] itinerary for your trip to Ireland. I don’t earn money from this blog so I’m adding this here because sometimes I realise all the free ‘help’ I offer one-on-one to lovely folks who message me takes away from other things I could be doing to earn money or keep my home running.