As an American living in Ireland, I have had to adapt to Thanksgiving Thursday being just another day. I shared my thoughts on this several years ago in an article in The Irish Examiner. Today, I’m not reflecting on my homesickness or how our forefathers took over the land of the Native Americans, but on the lesson we can all learn in gratitude and how to have your own Thanksgiving dinner or classroom capsule lesson. This post actually grew from Bumblebee’s teacher asking me about the holiday and I sent her WAY more info than she probably expected so why not share it here in case another teacher or parent is interested in learning the meaning of and traditions behind Thanksgiving.

I’ll go into Thanksgiving history, food, and crafts in a moment, but first if you have the chance to watch a video, A Charlie Brown Thanksgiving is what I grew up on and is still aired on TV each year so it’s a good primer to get you in the spirit of the holiday.

Just a cold fact here to set the record straight, Thanksgiving is ALWAYS the FOURTH THURSDAY in NOVEMBER. Sometimes that is also the last Thursday, as was the case in 2019. Black Friday is a commercial holiday created to take advantage of the kickstarting of Christmas and holiday shopping the day after Thanksgiving and does not relate to the holiday directly. 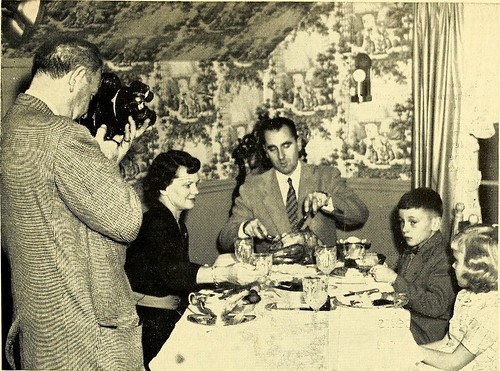 Note: All images in this post are copyright free and sourced from U.S. National Archives, U.S. Library of Congress, or Wiki Commons. A few food images at the very end of this post are my own. 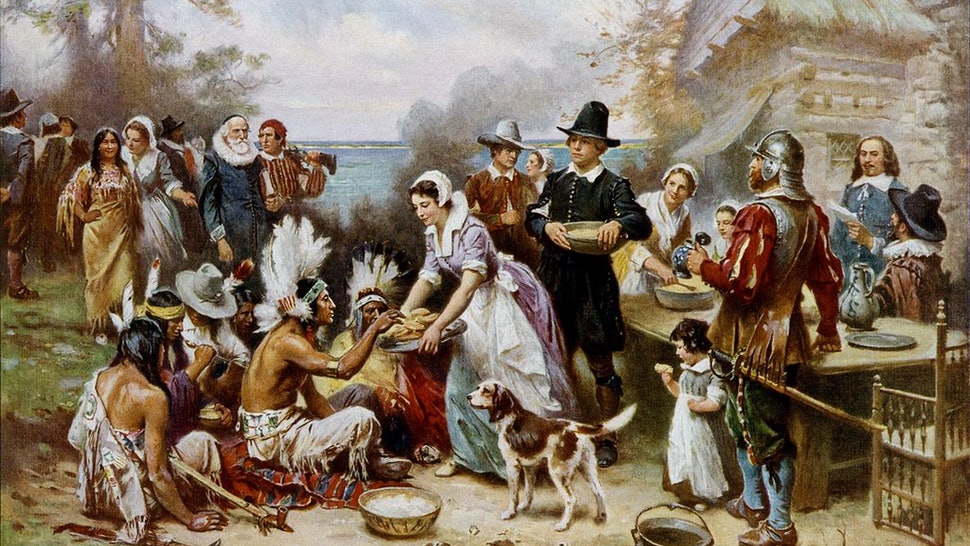 Thanksgiving as we were taught in my parents’ and my youth (1950s & 1980s Washington DC) is when the pilgrims arrived in the new world, they had a tough first year and the Native Americans helped them by teaching them to sow crops, like corn/maize. To thank them for their help and celebrate their first successful harvest in the New World, they held a dinner together called Thanksgiving.

Having said that, there is a lot we were not taught about how the Pilgrims treated the Native Americans. And we all know how they colonized the entire New World leaving the Native Americans to lobby for Reservations instead. Yep. The textbooks glossed over that bit. This Smithsonian Magazine article by Lindsay McVay offers a good overview and focus on the Wampanoag nation. Here is an excerpt:

“The antidote to feel-good history is not feel-bad history, but honest and inclusive history.” —James W. Loewen, Plagues & Pilgrims: The Truth about the First Thanksgiving

“The Thanksgiving story you know and the one I know are most likely the same. It’s the story deeply rooted in America’s curriculum—the one that inspires arguably the most important and tradition-filled holiday in American culture. We’re taught that in 1620 the Pilgrims fled harsh religious suppression in Britain, sailed across the Atlantic, and in December stepped ashore at Plymouth Rock, in what is now Massachusetts. With little food and no shelter, the colonists struggled to survive a brutal winter until a friendly Indian, Squanto, came along and showed them how to cultivate crops. Their first harvest resulted in a feast, as the Pilgrims gave thanks to the kind Indians for helping to bring the colony back to life.”

This National Geographic article and video explain the settlers experience and how different the first feast was to what we now call Thanksgiving.

In an article in Indian Country Today, many Thanksgiving myths are debunked and corrected.

This Time Magazine article also faces down the picture perfect textbook version of the holiday.

The basics are noted then more detail and history offered in this New York Times article by Maya Salam. An excerpt:

“The Mayflower did bring the Pilgrims to North America from Plymouth, England, in 1620, and they disembarked at what is now Plymouth, Mass., where they set up a colony. In 1621, they celebrated a successful harvest with a three-day gathering that was attended by members of the Wampanoag tribe. It’s from this that we derive Thanksgiving as we know it.”

Though the feast was not originally called ‘Thanksgiving’ and we are now 99% certain it didn’t include turkey or potatoes, what we celebrate now is thanks to President Lincoln. On October 3, 1863, he issued the Proclamation of Thanksgiving. Prior to this, such a day was celebrated, but on a different day in each state and without a common plan. Lincoln unified in many ways, and this is one of them so in his proclamation he made Thanksgiving one day for the entire United States. Keep in mind, this was done in the middle of the American Civil War, so it wasn’t just a fun little executive order saying everyone should wear red on Valentine’s Day. This was a step to unifying the States on something that mattered to everyone, even if they disagreed on other things. He was assassinated 18 months later. Here is the proclamation from President Abraham Lincoln:

By the President of the United States of America.

The year that is drawing towards its close, has been filled with the blessings of fruitful fields and healthful skies. To these bounties, which are so constantly enjoyed that we are prone to forget the source from which they come, others have been added, which are of so extraordinary a nature, that they cannot fail to penetrate and soften even the heart which is habitually insensible to the ever watchful providence of Almighty God. In the midst of a civil war of unequalled magnitude and severity, which has sometimes seemed to foreign States to invite and to provoke their aggression, peace has been preserved with all nations, order has been maintained, the laws have been respected and obeyed, and harmony has prevailed everywhere except in the theatre of military conflict; while that theatre has been greatly contracted by the advancing armies and navies of the Union. Needful diversions of wealth and of strength from the fields of peaceful industry to the national defence, have not arrested the plough, the shuttle or the ship; the axe has enlarged the borders of our settlements, and the mines, as well of iron and coal as of the precious metals, have yielded even more abundantly than heretofore. Population has steadily increased, notwithstanding the waste that has been made in the camp, the siege and the battle-field; and the country, rejoicing in the consciousness of augmented strength and vigor, is permitted to expect continuance of years with large increase of freedom. No human counsel hath devised nor hath any mortal hand worked out these great things. They are the gracious gifts of the Most High God, who, while dealing with us in anger for our sins, hath nevertheless remembered mercy. It has seemed to me fit and proper that they should be solemnly, reverently and gratefully acknowledged as with one heart and one voice by the whole American People. I do therefore invite my fellow citizens in every part of the United States, and also those who are at sea and those who are sojourning in foreign lands, to set apart and observe the last Thursday of November next, as a day of Thanksgiving and Praise to our beneficent Father who dwelleth in the Heavens. And I recommend to them that while offering up the ascriptions justly due to Him for such singular deliverances and blessings, they do also, with humble penitence for our national perverseness and disobedience, commend to His tender care all those who have become widows, orphans, mourners or sufferers in the lamentable civil strife in which we are unavoidably engaged, and fervently implore the interposition of the Almighty Hand to heal the wounds of the nation and to restore it as soon as may be consistent with the Divine purposes to the full enjoyment of peace, harmony, tranquillity and Union.

In testimony whereof, I have hereunto set my hand and caused the Seal of the United States to be affixed.

Done at the City of Washington, this Third day of October, in the year of our Lord one thousand eight hundred and sixty-three, and of the Independence of the United States the Eighty-eighth.

By the President: Abraham Lincoln 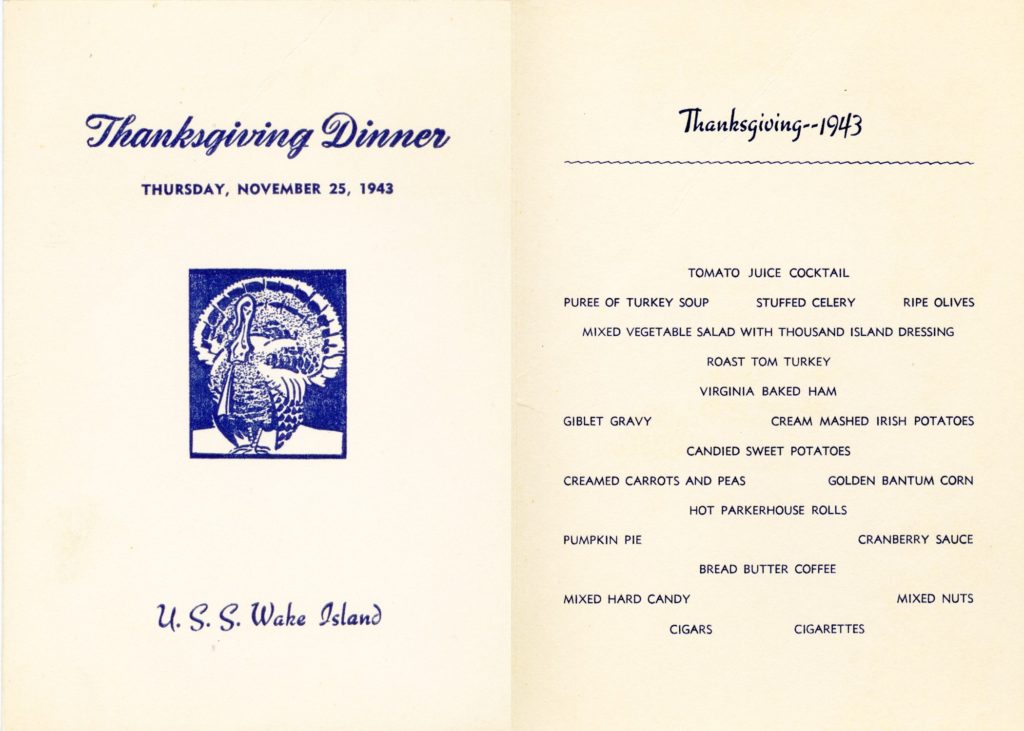 Originally, the food would have been different than it is traditionally enjoyed these days. Cranberries wouldn’t be there for a few more decades. Most of what was eaten at the original feast would have been harvested from the Pilgrim’s crops which resulted from all the help given by the Native Americans. Smithsonian Magazine has a great article on the food at the first ‘Thanksgiving’ feast, “The English colonists plant gardens in March of 1620 and 1621. We don’t know exactly what’s in those gardens. But in later sources, they talk about turnips, carrots, onions, garlic and pumpkins as the sorts of things that they were growing.” This article really goes into researched detail about what foods were available in that region at that time. For instance, it states, “The colonists did not have butter and wheat flour to make crusts for pies and tarts.” Yep, no pie. Any bread would be made with maize flour. And the side dishes would be limited as well. “Meat without potatoes, that is. White potatoes, originating in South America, and sweet potatoes, from the Caribbean, had yet to infiltrate North America. Also, there would have been no cranberry sauce. It would be another 50 years before an Englishman wrote about boiling cranberries and sugar into a “Sauce to eat with. . . .Meat.” Says Wall: “If there was beer, there were only a couple of gallons for 150 people for three days.” She thinks that to wash it all down the English and Wampanoag drank water.” What’s left? Well, some of the foods available in 1621 would be turkey, wildfowl, deer, eels, lobster, clams, mussels, chestnuts, walnuts, beechnuts, flint corn, small green beans, turnips, carrots, onions, garlic, and pumpkins or squashes. 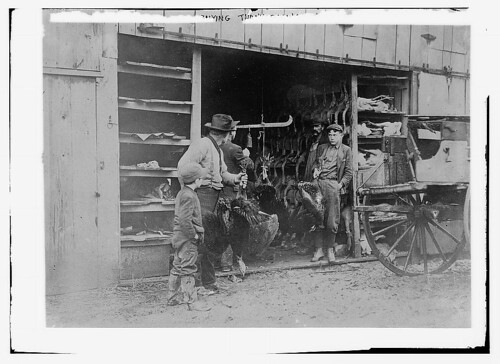 The idea that turkey was the meat for the feast came from many sources. According to Mashed.com, when A Christmas Carol by Charles Dickens was published in the 1840s, it introduced an American audience to the idea of a turkey being something extra special. And just for the record, Benjamin Franklin did NOT want it to be the national bird (myth debunked by Smithsonian Magazine).

So, a typical to a modern Thanksgiving table and what most Americans would consider ‘traditional’ is (recipes linked):

Here is a Pinterest board I made with reliable Thanksgiving recipes.

For Americans, when Thanksgiving is over, two things are for certain…
1) It’s time to start decorating and prepping for Christmas (or Hannukah)
2) The leftovers will be amazing on Friday. 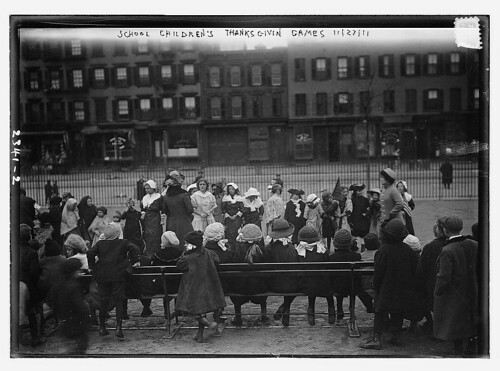 Whether you are living in the States or not, you can always choose to give thanks. Here are some photos of my own Thanksgiving cooking. Links to the recipes in THIS blog post. 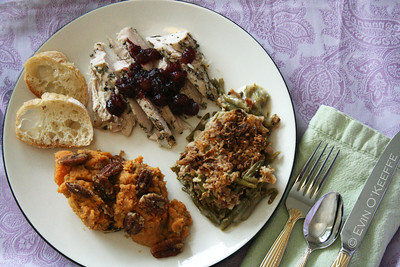 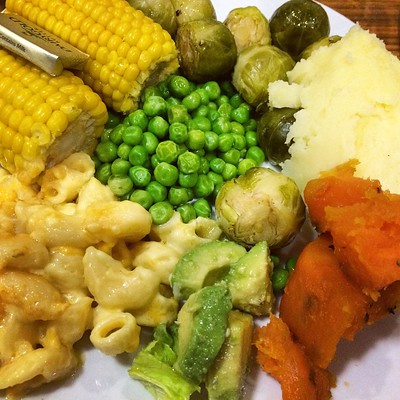 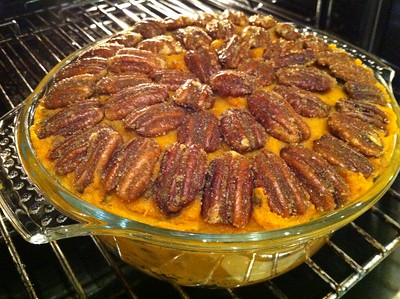