Pokémon Go isn’t everyone’s cup of tea and macaron, but it can be a fun excuse to get out and take a walk. We’ve read some inspiring stories about how it has bridged social gaps and helped people make new friends too. Being able to talk the talk as you walk the walk is useful when you meet other players, so I wanted to share a glossary of terms.

Some people are definitely in it to level up, so my friend DollRave teamed up with me on this post to share her insight. I’m a lowly level 15, but she’s up to level 27 or something, so between the two of us we have some useful knowledge to impart to the newcomer as well as anyone looking for a little strategy. Then our friend Frank added his two cents and Stephen chimed in, so it was a nice team effort.

As you’ll learn though, we both believe this is all about having fun and engaging with your environment so take this post for what it is… a light primer on a popular mobile phone game. 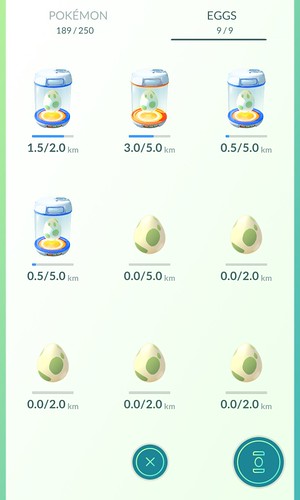 Pokémon Go is a location-based augmented reality mobile game developed by Niantic for iOS and Android devices. It was released in most regions of the world in July 2016. PokéStops and PokéGyms are re-purposed portals from Ingress, Niantic’s previous augmented reality game. If the origin interests you, definitely check out What Pokémon Go Owes to Ingress by Victoria Turk. 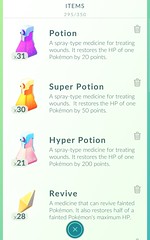 Poké Balls – A spherical device used by Pokémon Trainers to capture wild Pokémon and store them in the player’s inventory when not active. Upon contact, the balls draw a Pokémon inside and closes automatically. Wild Pokémon can resist and break free; however, weakened Pokémon and Pokémon with status conditions are less able to struggle and therefore more easily captured. Poké Balls are earned at PokéStops and through levelling up in the game. The size of the ball is similar to that of a golf ball. New players will only see red balls until level 12 is reached, then Great Balls (blue) are also available. Upon reaching level 20, Ultra Balls (black/yellow) can be acquired. You know you’ve reached level 30 when you have access to Master Balls (pink/violet), which are the strongest and essential for capturing rare and powerful Pokémon.

PokéStops – Popular geospots or places of interest which provide players with items, such as eggs, Poké Balls, and potions and can be equipped with items called lures, which attract wild Pokémon.

Combat Power (CP) – Each Pokémon’s combat power (CP) is a rough measure of how powerful that Pokémon is in battle. Not all Pokémon of the same species will have the same CP.

Eggs – Unhatched eggs of Pokémon that are earned through PokéStops. To hatch an egg, you need to walk a specified distance. Lucky eggs double subsequently earned experience points (XP) for 30 minutes so you can hatch strategically before a gym battle.

Potions & Revives – The health of the Pokémon can suffer and potions help restore that. These are available at Poké Stops from level five onwards. As with the balls, there are stronger potions as you increase levels. If a Pokémon is unconscious with a loss of HP, a revive is necessary.

Incense, Lures, and Razz Berries – On the hunt? Use Incense or Lures to attract Pokémon to your location for 30 minutes. This works not just for you, but for others in the game too so you can be the hero at home, work, or your corner Poké Stop. A Razz Berry is good to catch a rare or powerful Pokémon by making them think you’re friendly.

Pokédex – An electronic device designed to catalog and provide information regarding the various species of Pokémon. The name Pokédex is a portmanteau of Pokémon and index.

Different types of Candy  – Each type of Pokémon has it’s own kind of candy, such as Pidgey Candy or Zubat Candy. Candy is used to evolve or power up a Pokémon.

Power Up –  Feeding candy and stardust to your Pokémon to increase their CP and hit points for battle.

Transfer to Professor – Clear excess Pokémon from your backpack by transferring them to the Professor in exchange for one of that Pokémon’s type of candy. Once you’ve transferred a Pokémon to the Professor, you cannot retrieve it. 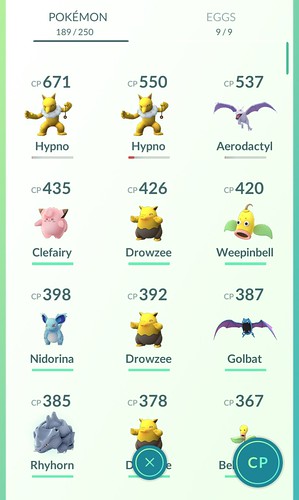 I’m not one to read ahead, I jump right in and start playing. After getting a feel for the game, I made it to level 20 in four days, generally playing 2-3 hours a day. It took another week to get to 24.

The game is designed so that the more real money you spend in the Pokéshop, the faster you level. Whether or not you spend money is up to you, this strategy will work either way, but it will definitely work faster if you give Pokémon your money. 🙂 If you chose to spend money in the Pokéshop, do so frugally and only if you can really afford it.

If you are inclined to spend money in the Pokéshop:

Whether you buy them or get them on level-up, use the lucky eggs when you are:

Otherwise, don’t spend your money, relax, and know the game is just as fun at 20-23 when you eventually get there.
I’ve only found 82 types of Pokémon at this point, so there’s still plenty of exploring left to do! And yes, I do have my Pikachu (one found in my wanderings, one hatched from an egg).

Thank you to DollRave, Frank, and Stephen for their input to make this post awesome.