*This is a very rare post that includes colourful language that is NSFW and not safe for children.*

In my day work in content marketing, I love seeing people really create cohesive and authentic content that doesn’t smack of strategy or sales goals. That’s what it comes down to. Being yourself and being true to that – that right there is your brand whether you like it or not. That also builds trust, so when something happens, your community rallies around you. And that’s what I’m sharing today because the Tits Out Collective launched by Countess Ablaze (I wrote about her Blind Dates before) can best be described as a creative revolution from within.

To see why this went viral, you need to know the background story. Basically, the Countess was offered an opportunity disguised as collaboration but really took advantage of her yarn dyeing shop in the name of charity. You can read her summary of it here on her blog (*colorful language alert*). I really cannot explain it any better. Or if you prefer to listen to the tale unfold, the best way to fully learn about this movement is to listen to the podcast episode with Shinybees and the Cottage Notebook podcast episode. And you may as well subscribe to Shiny Bees and Cottage Notebook while you’re at it.

The Countess decided to turn the tables and help charity on her own terms, with two custom colorways to benefit Women’s Aid, a UK charity that helps women to escape domestic violence. Those two colorways sold out and due to demand (and the fact that she announced she would never dye the Tits Out colorway again), the Countess decided to share her dyeing recipe for the colorway and organise a collective – The Tits Out Collective. Naturally, there were rules, but it made such sense and was just what we as a community of makers love – to help others while doing our thing.

The outcome surprised even the Countess herself with so many members of the creative fibre arts community joining the global movement. All Tits Out Collective members launched their own versions of the ‘If I Want Exposure, I’ll Get My Tits Out’ colorway or a design or other creation on July 1st and the official hashtags went wild (#titsoutcollective and #ifiwantexposureillgetmytitsout).

In 22 countries, a total of 287 hand-dyers, designers, and makers joined the collective in their own ways, each having a portion of sales going to a specified charity. You can find the gallery of participants HERE.

One month later, the charity donation should be made and information shared back with the Countess. The Countess shares her thoughts after it’s all said and done.

The Movement Lives On

On August 3rd, the Countess announced the final amount donated to charity as part of the Tits Out Collective for 31 days of sales for all participating members and supporting community members was (sit down for this)… £55,219.35 – in other currencies that translates to €62,029.60 or $71,975.97 USD or $93,520.17 CAD. It’s a BIG number and that’s all the worldwide charitable donations, not just the proceeds. That is a significant amount to help charities and the people they help. And because each member chose their preferred special charity, this movement has helped SO MANY people on the charitable end of things.

This movement also helped those who participated. In a world where we sometimes feel like we cannot make a significant difference, we realised the power of US as a collective. The Countess reminded us of a strength within us and what we can do when we stand up for our worth and our beliefs without compromising our own values or integrity – all this while making some pretty beautiful things.

The Countess relinquished the name ‘If I Want Exposure, I’ll Get My Tits Out’ into the world and dyers can continue creating the colorway and selling things under that name with an honor system to continue contributing that portion of proceeds to charity. So missing the original launch doesn’t mean you’ll miss out on this colorway altogether. I’ve linked to a few I’ve seen that have items on sale still.

My Skein from Bear In Sheep’s Clothing

Aside from the charitable element of this movement, I love pink and yellow together so I wasn’t about to sit out this yarn sale. My friend Bernie dyed up a beautiful version on her Bear Sock and it called to me (she’s on the other end of the same island, so sound travels well). She’s in Northern Ireland and lovingly dyes bases which are 100% British born, bred, and spun. This totally goes with my love of knitting local wool (as you know if you read These Islands).

The skein I bought was dyed on her Bear Sock base, which is 75% superwash BFL 25% nylon. The yardage is a whopping 100g/400m and the texture is soft enough for a shawl, strong enough for socks – with lovely loft. Hand-dyed using the highest quality acid dyes. The dyer’s choice was that £3 from each sale was donated to Alzheimer’s society. 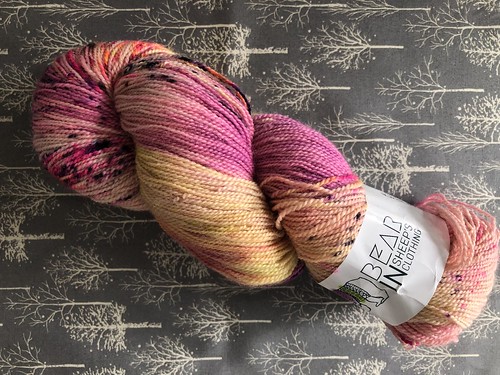 Many options are still available for an ‘If I Want Exposure, I’ll Get My Tits Out’ yarn, batt, or notion. Here is a partial list based on a quick Etsy search, but I’ve not cross-checked with the official participant list because it isn’t searchable by name. I’ve noted what it links to, such as minis, sock blank, full skein, or fiber. 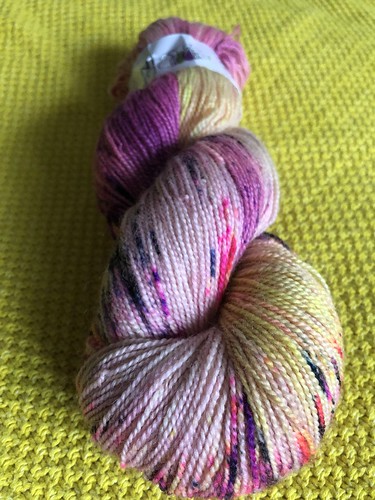 Not Just Tits Out

Take heart, if you’ve missed out on buying vibrantly-dyed purple-orange-pink Tits Out yarn, the color combination isn’t new and there are loads of options popping up. And just because there isn’t a charitable element to your purchase, doesn’t mean you can’t help others in your community or around the world just because. So, here are unrelated yarns using the same colors in a different way: 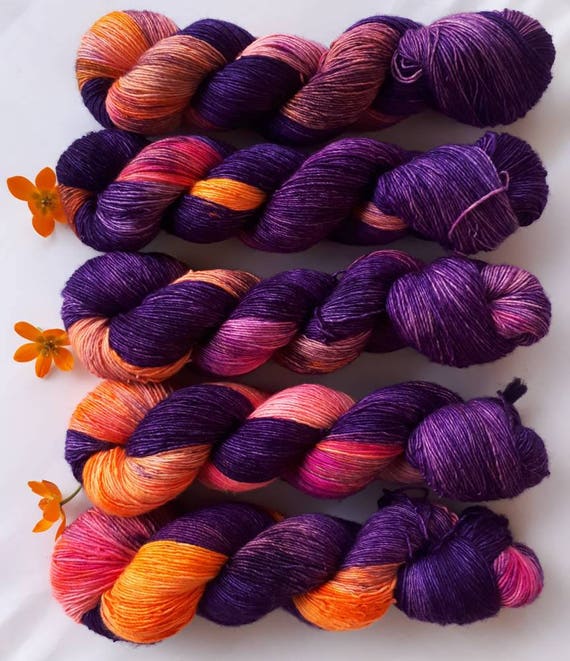 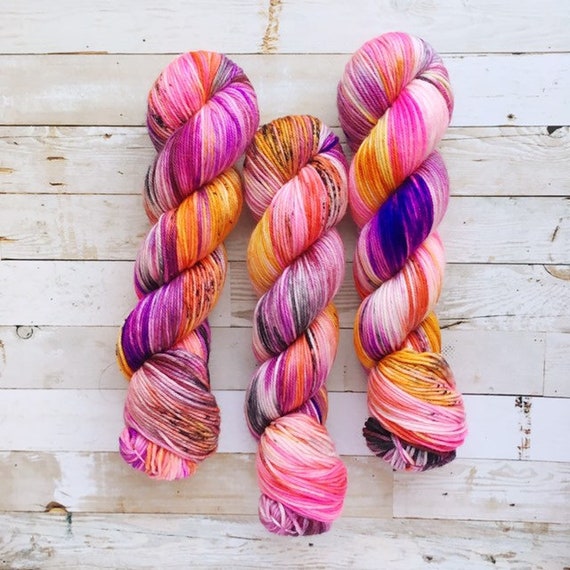 Did you purchase something on July 1st? What did you choose and why? If you every time you bought yourself yarn, you donated $3/€3 to the charity of your choice, would this encourage or discourage you? I feel like it would make me very conscious of my purchases, but in a good way.